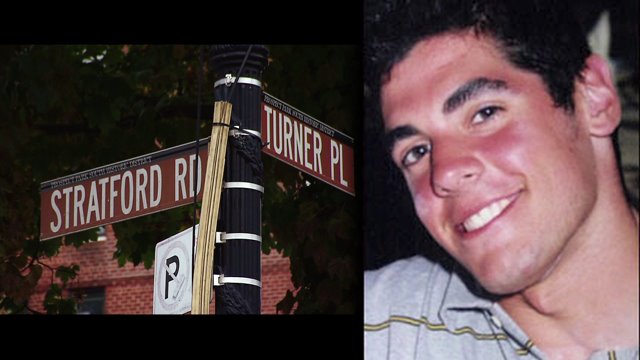 It was one of the most sensational murder cases of 2003.

A 19 year old college student named Mark Fisher—raised in New Jersey and studying at Fairfield University—hit Manhattan for the first time on October 11, 2003, and met some college friends at a bar.

They went to Brooklyn for a 5 a.m. house party and Fisher ended up fatally shot in a driveway by 6:40.

“We heard shots, and then we heard voices,” said Michel Swornik, who showed us the spot outside his home on Argyle Road where he found Mark Fisher’s body in the early hours of October 12, 2003.

“He was on his back. He had a jacket, I seem to remember it was beige cloth.”

Swornik told PIX11 Investigates he distinctly heard what sounded like the sliding door of a van and then focused on the voices.

“It must have been two or three people. And there was a woman also. A female voice. Definitely.”

These details were never heard by two different juries at the 2005 trial for two men convicted in the case.

Prosecutors never called Michel Swornik and other neighbors on Argyle Road as witnesses.

People have long wondered whether their statements would conflict with the official theories on the case presented at trial.

Antonio Russo, then 19, was the convicted shooter. John Giuca, then 21, received life in prison for providing the gun—the jury believing he ordered Fisher’s shooting as part of a tough-guy ritual in his “Ghetto Mafia” gang.

Details were provided by three people, including Giuca’s girlfriend, who said Giuca confessed to her.

But there were problems with the case from the start.

Mark Fisher’s college friend, Angel DiPietro, had invited him to the house party in Brooklyn, but gave inconsistent statements to friends and investigators about phone calls Sunday morning.

She went to the home of Albert Cleary Sunday morning to get some sleep, diagonally across the street—up Argyle Road—from where Fisher’s body was dumped.

Both Cleary and DiPietro later said they never heard gunshots. They did say they cleaned out his family’s garage Sunday morning.

Cleary’s mother was a vice chair for the Brooklyn Republican Party—and then-District Attorney, Charles Hynes--a Democrat--was hoping to get the party’s endorsement, when he ran for re-election.

This week, Brooklyn DA Thompson said Giuca’s conviction is one of 130 his office currently has under review.

“We will get to that case in due course,” Thompson said, “We’re not going to rush these cases.”

Giuliano has been so intent on proving her son got railroaded that she went “undercover” about six years ago and wooed a male juror who had convicted her son.

She claimed Jason Alito admitted he was biased against John Giuca, believing he was Jewish.

The van that Michel Swornik heard idling outside his house was never found—and neither was the gun that was used to shoot Mark Fisher. Only 2 shell casings from a .22 caliber weapon were found near Fisher’s body. Where were the other three?

In 2012, then-District Attorney Charles Hynes, hired his former witness, Angel DiPietro, as a prosecutor in the Brooklyn DA’s office.

DiPietro still works at the Brooklyn DA’s office, under Ken Thompson, but did not return a call from PIX11 Investigates, seeking comment.

Back on Argyle Road, Michel Swornik showed us a small, memorial rock that Mark Fisher’s parents asked to leave in the garden, near the site where he died.

“They come every year,” Swornik told PIX11. “I have a son, and I know exactly what it would feel like.”