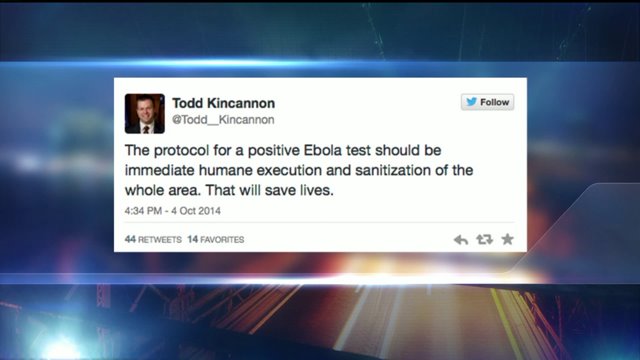 A prominent South Carolina Republican fired off a series of offensive tweets on Twitter about how to handle people with Ebola.

(PIX11)-- A prominent pro-life Republican in South Carolina has a plan to stop an Ebola outbreak in the United Nations.

Kill anyone who gets it.

Todd Kincannon, the former executive director of the South Carolina GOP went on a Twitter tirade this weekend.

His first tweet read: "People with Ebola in the US need to be humanely put down immediately."

People with Ebola in the US need to be humanely put down immediately. RT @AP: Dallas hospital: U.S. Ebola patient in critical condition

Then in a following Tweet: 'The protocol for a positive Ebola test should be immediate execution and sanitation of the whole area. That will save lives."

He unloaded about a half a dozen other really hateful messages.

He blames the spread of Ebola on the people of Africa for: "Eating each other."