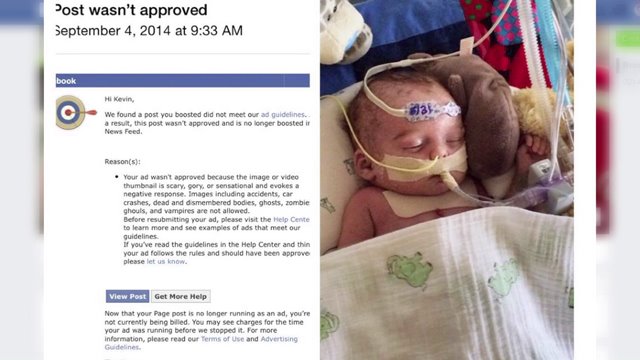 A father looking to raise money for his 2-month-old son`s heart transplant was shocked when Facebook denied an ad for his fundraising page due to "offensive" content.

GREENSBORO, N.C. (PIX11) -- A newborn baby is recovering from a heart transplant almost two weeks after Facebook denied his father's ad to raise money for the surgery.

Hudson Bond, 2 months old, was diagnosed with the heart disease cardiomyopathy. The child was living on an artificial heart until he underwent surgery Monday.

The 2-month-old made national headlines when Facebook denied his father's ad for the family's fundraising page "Hudson's Heart." The ad, which contained a photo of Hudson in the hospital, was flagged for "offensive" content.

Hudson's family was working to raise $125,000 for the transplant.

“I was really hurt actually. I mean I kind of cried. He’s my son, I love him. And to have someone reject a picture… [of] my beautiful son lying in a hospital bed needing help — that really cut me,” Kevin Bond, the baby's father, told ABC11 early September.

The ad was a critical component to the family's fundraising for the anticipated $125,000 surgery. Facebook officials later apologized and offered the family $10,000 worth of Facebook ads to make up for the incident, KTLA5 reported.

Despite the denied ad, the family was able to raise $143,850 for the heart transplant, according to the Children's Organ Transplant Association. More than 3,000 donations were made for Hudson's surgery.

Hudson was being treated at Duke University's Pediatric Cardio Intensive Care Unit, where doctors told the Bond family Sunday that a heart had been found for the baby. He received surgery the next morning on Sept. 22.

“Hudson is doing very well … Last night I really slept for the first time in two months. My heart made whole by that precious little gift beating strong in Hudson’s chest,” the boy's father wrote on Facebook Tuesday morning.

“Thank you will never be enough for all you’ve done to support Hudson. He’s got a long way to go, but we can honestly say we would have never gotten this far without you all.”