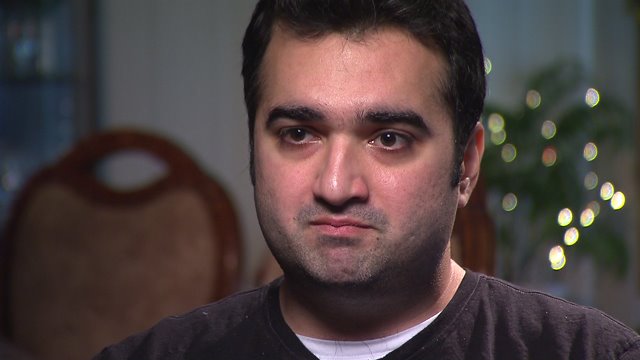 A jewelry designer who studied at the Fashion Institute of Technology and used to love walking wants nothing more than to move normally again -- and to find out who nearly killed him -- after surviving a "hit and run" accident last year in Kew Gardens.

FRESH MEADOWS, Queens (PIX11) -- A jewelry designer who studied at the Fashion Institute of Technology and used to love walking wants nothing more than to move normally again -- and to find out who nearly killed him -- after surviving a hit-and-run crash last year in Kew Gardens.

“I hate not walking,” Ronnie Aminov, now 31, told PIX11 Investigates at his parents’ home in Queens. “Because I can’t do anything on my own.”

On March 16, 2013, just about three weeks before his 30th birthday, Aminov, the son of immigrants from Uzbekistan, was walking home on Union Turnpike about 2 a.m., after leaving a friend’s house. He was about a block from Queens Boulevard, by the intersection where the Grand Central Service Road meets Union.

“All I remember from the accident is looking to my left, and seeing the car, and I was like, ‘Oh, shoot!’”

“It veered off the road,” said Danny Barayev, one of the students. “It definitely seemed like he just lost control, and he hit the pedestrian. Sparks started flying out of the bottom of his car. He got back on the road and flew away.”

The passenger side of the Sentra now had a broken mirror.

The two students ran over to Aminov, who was still breathing but not responsive.

“We called 911 and we waited for the ambulance,” said Arthur Matayev.

Another Good Samaritan, a woman, got a blanket out of her car and placed it over the stricken pedestrian.

When Aminov got to New York Hospital Queens, doctors told his parents he probably wouldn’t live for more than three days. They performed a craniotomy to reduce brain swelling.

He was put into a medically-induced coma. Aminov was later moved to New York Presbyterian-Weill Cornell Medical Center.

And Aminov rallied, successfully brought out of the coma after three weeks, and breathing again on his own the day after his 30th birthday.

But when he tried to walk, his twin sister remembers he was in excruciating pain. A neurosurgeon later told the family the brain trauma led to incorrect messages going to the bone “growth centers” in Aminov’s left hip and left knee.

“Sometimes, after a traumatic brain injury, the brain just sends the wrong signals to the joints,” Irena Dabakarov told PIX11.

Aminov spent a total of seven months in hospital, a rehab center, and then, a nursing home. He was discharged in December 2013.

Now, Aminov would like to focus on walking again and finding the person who changed his life in an instant.

“He nearly killed me,” Aminov said through tears. “I just want him to feel bad.”