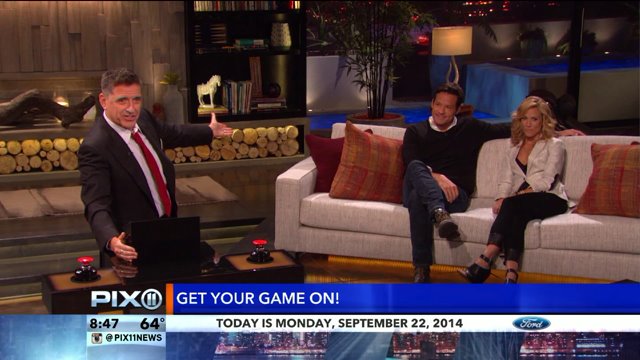 Craig Ferguson plays games on his late night show "Celebrity Name Game." We get in on some of the fun.

(PIX11/AP) -- Craig Ferguson likes to play games so we thought we'd play one with him as well. His new role as host of "Celebrity Name Game" premieres Monday night at 7:30pm on PIX11.

Craig Ferguson approached his first TV game show host's job with a subversive attitude. Then came the simple matter of his wardrobe for "Celebrity Name Game."

"I thought, 'I'm not going to wear a suit. I'm going to break that rule,'" Ferguson said. Wrong decision, he quickly realized, after taping the first few episodes of the syndicated daytime show debuting Monday.

"When I watched the shows back, I couldn't tell who was in charge," he said.

On came the business suit, fitted over the sly, irreverent style that his nighttime fans know from CBS' "The Late Late Show with Craig Ferguson," which began airing in 2005.

He wouldn't have tackled a game show without the opportunity of making it his own, Ferguson said.

"I liked this one because the format was loose and it left a lot of room for playing around and improvisation," he said. "And it's a new format, which meant that people weren't in love with the game itself and wouldn't get mad at me if I started messing around with it."

The challenge, Ferguson said, is to mess around while still observing the rules of the game. He's getting the hang of it as he tapes 180 episodes in a three-month production window, with hopes that the show is renewed so he can do more mischief.

Courteney Cox is confident he's right for the job. The "Cougartown" and former "Friends" star is an executive producer on the show along with her ex-husband, David Arquette.

"Craig is the perfect host," Cox said. "He is hilarious, irreverent and so spontaneous. He is unflappable and really enjoys himself, which is contagious for everyone around him."

The show, based on the board game Identity Crisis, pairs celebrities with contestants to figure out — using improvised clues — the names of actors, singers, athletes, politicians and other famous folk.

There are other big names involved with "Celebrity Name Game": co-producers FremantleMedia North America ("American Idol," ''The Price is Right") and Debmar-Mercury, the Lionsgate subsidiary that distributes Fremantle-produced "Family Feud."

"It made sense to us to use that success in the marketplace to leverage position for the show," Beers said. "Family Feud," with host Steve Harvey, is in 190 U.S. TV markets, most of the country; "Celebrity Name Game" is starting close behind with 169 markets.

For Ferguson, the game show represents both a change of pace and a transition. He's leaving his CBS talk show in December, with British actor James Corden taking over next year.

Ferguson is open to what happens next. Maybe another talk show, he said, maybe not. But with the compressed taping schedule for "Celebrity Name Game," there's definitely room for other endeavors, whether new or familiar.

"I have some ideas kicking around in the Discovery network field. I'm interested in a lot of different things and I actually haven't come down on anything yet," he said.

"I'll always do standup, which is kind of my instrument, if you like, the thing I learned to do first."