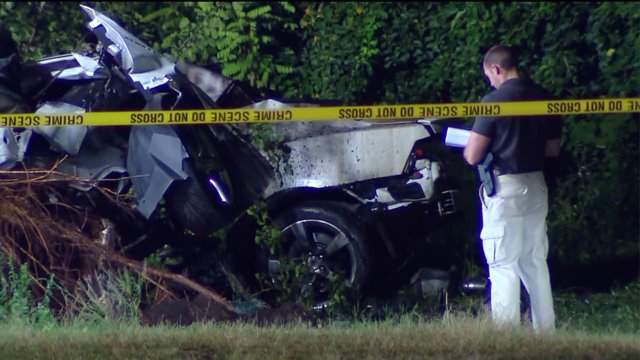 Authorities say there are at least 2 people dead after a car collision on Meadowbrook State Parkway and Exit 5 that happened shortly after midnight.

UNIONDALE, Long Island (PIX11) -- An investigation is continuing Monday into a deadly single-car crash that killed two men along a Long Island highway.

It happened about midnight on the Meadowbrook State Parkway near Exit 5.

Stanley Miles, 22, was behind the wheel of a 2011 Chevrolet Camaro when he lost control and struck a cement median, according to the New York State Police.

The Camaro then drove across multiple lanes of traffic and collided with a tree on the right shoulder.

Miles and his 31-year-old passenger, Darren Gregory, were pronounced dead at the scene.

The car was left mangled and nearly unrecognizable on the side of the parkway. Speed is being eyed as a factor in the wreck.

The fatal crash shut down southbound lanes of the parkway for several hours. The roadway was reopened shortly before 7 a.m.

During the closure, a driver not connected with the initial crash hit a marked police car, causing minor damage to both vehicles.