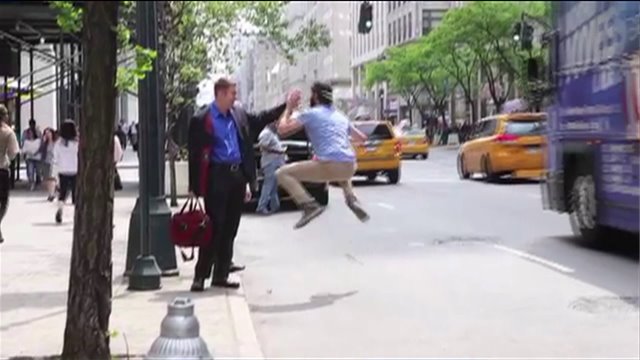 Hailing a cab in New York City is almost never fun unless you get high-fived by a bearded prankster whose merry spirit simply will not be tamed.

NEW YORK (PIX11) -- New York City has served as a back drop for some of the biggest videos on YouTube.

Some make it big for all the wrong reasons while others manage to put a smile on your face in the process.

A bearded Brooklyn man armed with good intentions – and a film crew – pounced on unsuspecting New Yorkers, offering up high-fives as they hailed cabs in the city.

The final product was “High Five New York,” a now-viral video that has been viewed over a quarter million times on YouTube.

His name is Meir Kalmanson and his goal was simple – not to leave anyone “hanging.”

“Part of the New York City culture is waiting for the taxi as you know,” Kalmanson told PIX11 News. “So when I was walking down the street one day I thought ‘hey a lot of fellas here are being left hanging for high-fives, you know.”

“This is amazing, why hasn’t this gone viral yet,” he thought. “It’s so simple and so pure.”

The wheels started turning and the filmmaker/actor decided to produce a video of the pedestrian hijinks. The rest, is YouTube history.

As to whether he was ever concerned with the reaction he was going to get when approaching a complete stranger, according to him, of course – “it’s New York.”

“Of course I was ready for any sort of reaction. Positive or negative or something in between but inside I knew I wasn’t going to get anything aggressive.”

Thankfully, no injuries were reported in the filming of “High Five New York” and more importantly – no one was left hanging.