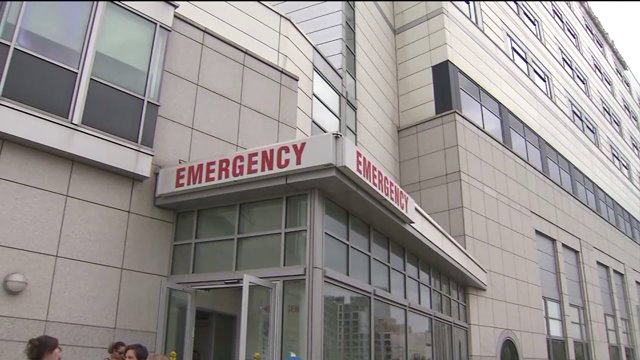 Dozens of young children were rushed from a day care center to a Jersey City hospital Thursday morning to be tested for bleach ingestion.

JERSEY CITY (PIX11) -- One by one, they emerged from the Jersey City Medical Center.

As for their parents?  A few were able to produce smiles after a frightening morning.  The parents were wondering how 30 children from the Growing Tree Learning Center II day-care center ended up in the ER as a result of a terrible mistake the hospital attributes to a day-care worker who was just hours into her first day on the job.

"The report we were given is that a cleaning solution was made up at the day care yesterday with a small amount of bleach mixed into a bottle of water.  Unfortunately, it was not labeled and somebody thought it was regular water and served some small Dixie cups of this solution to the children at the day care," said Dr. Michael Bessette of Jersey City Medical Center.

The concentration of bleach was very low, so fortunately the kids were fine. Nonetheless, all were taken to the trauma center on this Sept. 11, which is named after the Port Authority Heroes from 9/11.

It was shortly thereafter that parents began to arrive and doctors provided a thumbs up, "They're obviously a little excited. They get a big

The big issue now is figuring out how the bleach-laced water was served to children.

"It bothers me and that's why I want to investigate this, because I have to find out," said Keith Kearney of the learning center.

Kearney also informed PIX 11 News that the worker has been removed.  Parents were expected at the facility Thursday evening for a parents meet and greet.