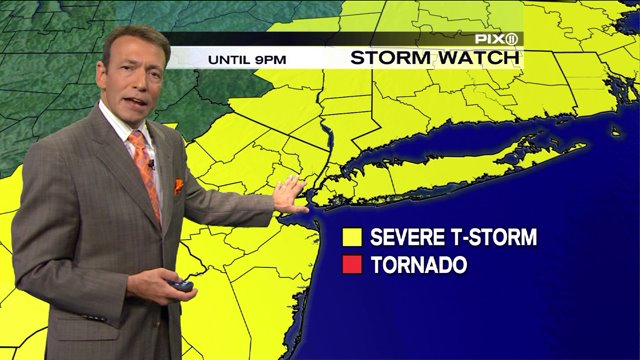 A collision between unstable, warm air and a cold front caused heavy flooding, downed trees and even hail in several areas in the tri-state.

Heavy rain, hail and high winds brought trees down, knocking out power in New Jersey, and intense rain storms flooded low-lying areas and tunnels in Fairfield.  The intense gusts caused damage in Queens, as well -- in one case crushing a car under the weight of a large tree.

Thousands of homes and businesses were without power after severe thunderstorms roared through New Jersey.

The storms contained heavy rains and strong winds, which damaged trees and downed power lines in many areas on Saturday afternoon.

Jersey Central Power and Light reported that 35,405 customers were without electricity early Saturday night, while about 1,900 PSE&G customers had no service. Scattered outages were reported in southern Jersey, where the storms were not as severe.

Crews were working to restore power to all customers by midnight Saturday.  By 9:30 p.m., that number had gone down to 22,201, mostly in Monmouth County.

In Connecticut, 2,682 customers lost electricity.  The most-affected area was Norwalk.

Con Edison reported 38 customers without power in New York City -- mostly in Queens and Brooklyn -- and another 28 in Westchester.

On Long Island the tally was at 265 customers, according to PSE&G.