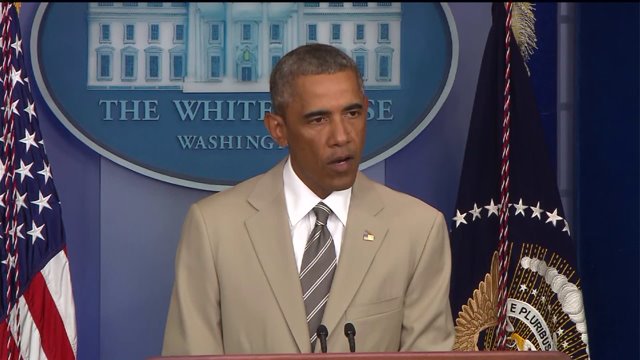 Although President Obama was addressing serious topics during a speech Thursday, the Twitterverse was talking about his tan suit. 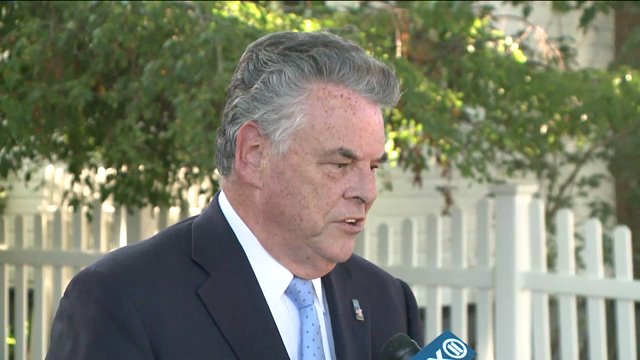 King called the suit "a metaphor" for the president's "lack of seriousness" during a White House briefing Thursday, during which he opened with a statement about the economy instead of recent terror-related events.

"I don't care what color he wore if he was addressing the issues seriously, but to me it was a metaphor for the entire lack of decision-making, the lack of seriousness and the lack of addressing how vital and mortal this is to the United States."

King originally made his original comments blasting the president in an interview with NewsMaxTV.

"There's no way I don't think any of us can excuse what the president did yesterday," King said.  "You have the whole world watching, you have a week, two weeks of anticipation of what the United States is going to do and then for him to walk out -- I'm not trying to be trivial here -- in a light suit, a light tan suit."

King criticized Obama for starting with "second quarter numbers on the economy and this is a week after Jim Foley was beheaded, and he's trying to act like real Americans care about the economy and not about ISIS, not about terrorism, and then he goes on to say that he has no strategy."

Peter King blasted the president for wearing a tan suit.

He continued by saying that Obama appeared uncomfortable with foreign policy, and claimed the president would rather talk about "some social engineering or health care or whatever."

"It was just a terrible performance by a commander-in-chief."

But while the Internet was busy posting photos of Ronald Reagan in tan suits, criticizing the loose fit or wondering what alternate universe this "controversy" was taking place in, King suggested an underlying message.

"Forget that our allies are watching, forget that the American people are watching, ISIS is watching," he said.  "If you were the head of ISIS . . . would you come away from yesterday afraid of the United States?  Would you be afraid that the United States is going to use all its power to crush ISIS?  Or would you think, there's a person who's going to go out and do a few fundraisers over the Labor Day weekend?"

And if, indeed, Peter King is as serious as he sounds when it comes to tan suits, how does he explain this: