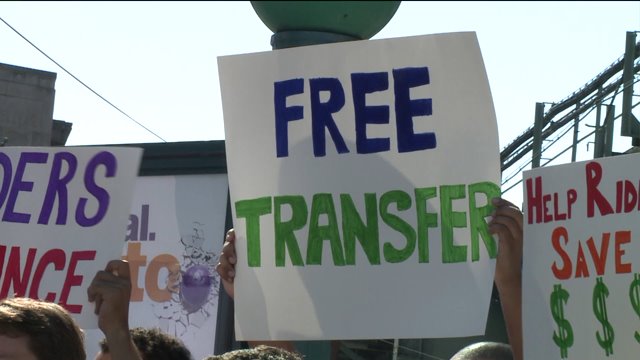 The Riders Alliance and elected officials joined the rally near the Broadway and Lorimer stops.

Riders and elected leaders are asking the MTA to continue a free, above-ground transfer for all MetroCard holders. But the MTA does not plan to reconsider the decision.

The free connection was made available between the Broadway stop on the G line and the J/M Lorimer stop. The stops are a short distance from each other in Bushwick.

The MTA offered the free transfer during a month-long construction project on the G line (which is set to run through September 2, 2014). The authority estimated continuing the transfer could mean at least a $700,000 decrease in revenue.

State Senator Daniel Squadron and members of the Riders Alliance say extending the free transfer would help connect the area and increase transit options for Brooklyn. Senator Squadron says it would also help people who do not have unlimited MetroCards and save them from paying a second fare to make the switch.

A free transfer is available along Lexington Avenue at 63rd and 59th Streets on the F and N/Q lines because the F originally stopped at that station before it was rerouted years ago.