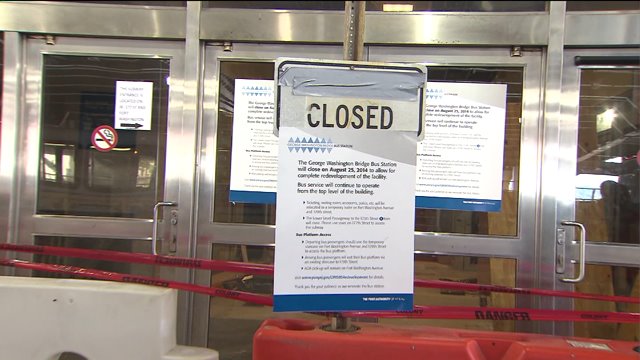 Commuters will get to see a new, polished bus terminal at the George Washington Bridge as construction starts Monday.

The bus terminal on the Manhattan side of the George Washington Bridge will remain open while more than $180 million worth of renovations are made.

But some of the signs at the busiest entrances were not easy to see.

Most of the regular entrances are closed. The station can be accessed by a staircase on the corner of 179th Street and Fort Washington Avenue. New Jersey Transit service is continuing from the terminal.

On the first day of the work, signs announcing the bus stop locations were not immediately visible at some of the secondary entrances that had been fenced off. Work started on Monday and is expected to last at least a year.

The subway can be accessed by walking outside to the corner of 177th Street and Fort Washington Avenue. Previously, many riders used an underground passageway from the bus terminal to the A train. That portion is closed. A sign near that area says the work lasts until April 2015.

A study of possible renovations to the Port Authority Bus Terminal has just wrapped up and the Transportation Center in lower Manhattan may be done next year.