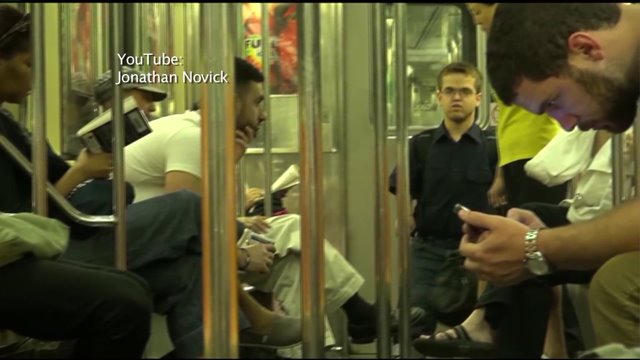 Jonathan Novick created `Don`t Look Down On Me,` a documentary on Youtube that documents his experiences in NYC.

He’s a student at Hunter College and his favorite show is “Game of Thrones.”

But most wouldn’t know that because the average person typically zeroes in on just one thing.

“The term is dwarf or little person,” Novick says, describing who he is. “Either one is fine, just not midget.”

Being on the receiving end of endless stares from gawkers is unfortunately part of Novick’s daily routine.

“It’s frequent enough to the point that I think about it when I’m out in public. It makes me aware – very aware, that I’m different more than I’d like to be.”

A native of Fishkill, N.Y., Novick moved to the Big Apple a year ago. An incident that happened during that time forced him to take matters into his own hands.

“One day I was coming out of work and one individual jumped over me, while a crowd of people looked on,” he said. “It got me so furious and simultaneously powerless.”

From powerless to inspired.

The outcome was “Don’t Look Down On Me” – a documentary where the filmmaker exposes the daily harassment from onlookers with a hidden camera.

“What is he!?” shrieks a passing girl, while another yells “Hey short stuff!”

During the encounters, Novick kept his cool. He explains that his reaction is usually prompted by the day he’s having.

“There was one day I was on the subway. I was on the 7 train going back to Queens when I see a man with his phone out and it looks like he’s about to take a picture ,” he recalls. “Then I’m on the tipping point and then I hear the shutter go off.”

“He just wouldn’t acknowledge me.”

If it’s not pictures, its assumptions.

“You ever been on TV?” a stranger asks Novick in his YouTube film. To which he responds no.

“You know who you look like? You ever watch that show – “Little People, Big World”?

Novick does not watch the show.

The filmmaker insists he’s not looking for pity with his now-viral YouTube documentary instead, he wants to relay a very simple message.