Subway stations get new neighborhood maps but more are needed 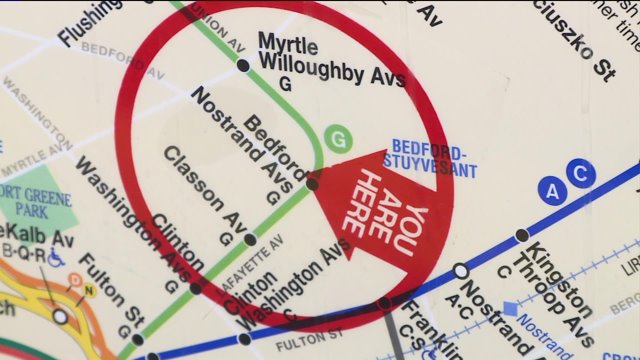 Getting around the city subway system is challenging for a lot of people.

Navigating the New York City subway system is a challenge.

The MTA is partnering with the NYC Department of Transportation to update the local-area maps in the stations. More than 68 different versions currently exist within the system. The new maps have a coverage radius of about 12 blocks and provide more site-specific information to that station.

The maps are located near some of the entrances and exists.

Some riders would like to see more information available at the platform level. Some other systems in the United States, and many in Europe, have more detailed and easy-to-understand information about exists and locations.

The Metro in Paris has specific information about exits and locations

The MTA says all 468 subway stations will eventually have the new neighborhood maps. They have been installed first in Brooklyn at the Bedford-Nostrand station on the G, on the A/C at Nostrand, at President Street and at Sterling Street on the 2/5 lines. These stations are also along the B44 Select Bus Route and the stops are indicated on the maps.

In a news release, the NYC DOT Commissioner (who is also a new MTA Board Member) is quoted as saying, “This partnership with the MTA allows for consistent maps above and below ground, making it easier for users to reach their destinations. We’re excited to provide this resource to New Yorkers and tourists to find their way in the city.”

“Though we’ve kept the MTA’s neighborhood maps up-to-date, this is the first redesign since the original set created more than 20 years ago and will be extremely helpful to subway customers as they leave the system and look for neighborhood points of interest,” said MTA Senior Director of Corporate and Internal Communications Paul Fleuranges.

New local-area maps to appear inside NYC subway stations. These are located in Brooklyn as of August 2014.