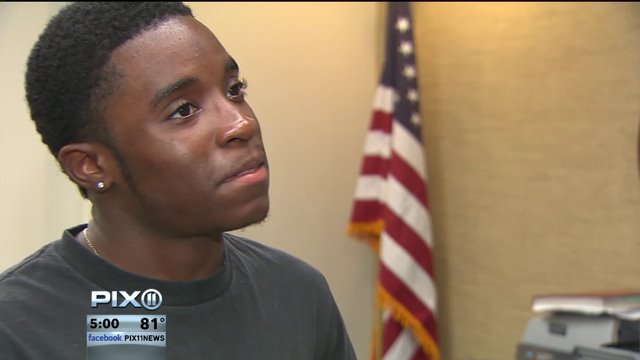 Barneys must pay up for racially profiling customers from the moment they entered the store.

NEW YORK --  "It made me feel much better, like [they're] actually on top of them about something."

That was Trayon Christian's reaction  to New York State Attorney General Eric Schneiderman's announcement Monday morning that the state had fined Barneys $525 million after investigators found that the store had indeed profiled black and Latino shoppers.

When asked if today's ruling makes it a little bit easier? Christian said, "Yeah, it does, just a little bit."

PIX11 News caught up with Christian exclusively Monday morning in lower Manhattan after the announcement was made.  Christian said that ever since April 27, 2013, life just hasn't been the same. "It has been tough a time."

It was on that date that the 19-year-old was falsely arrested by the NYPD after he cleanly purchased a $348 Ferregamo belt at Barneys. The NYPD arrested Christian yards from the store after it was believed he used a fraudulent credit card.

In a federal lawsuit against Barneys as well as the city of New York, Christian's attorney, Michael Palillo, stated that the NYPD and Barneys were working in concert. Additionally it alleges that the NYPD had detectives inside the store when the purchase was made.

Barneys denied collaborating with the NYPD, but back on Nov. 20, PIX11 News revealed legal complaints in which Barneys had tipped off the NYPD.

As for the city's response to the actions of the NYPD? In a response to the federal lawsuit on July 1, the city informed the court that it was Christian who provoked the incident.

Which is why Monday's announcement is pivotal, according to Palillo, because in addition to being fined, Barneys admits that it will adopt new loss-prevention policies, procedures and train its employees,

"It's a public acknowledgement of the horrible, horrible situation going on at Barneys and I'm glad that it's coming to an end."

Barney's CEO Mark Lee issued an 88-word statement in response to the fine, but didn't apologize.

"We are pleased to have come to an agreement" and later added that Barneys "has absolutely no tolerance for discrimination."

The federal lawsuit against Barneys for racial profiling continues to march ahead: "We are still proceeding with our case," said Palillo.

Both sides are due back in court on Aug. 21. Barneys would not comment on the pending litigation.