The hunt for a serial killer: Revisting the Gilgo Beach murders 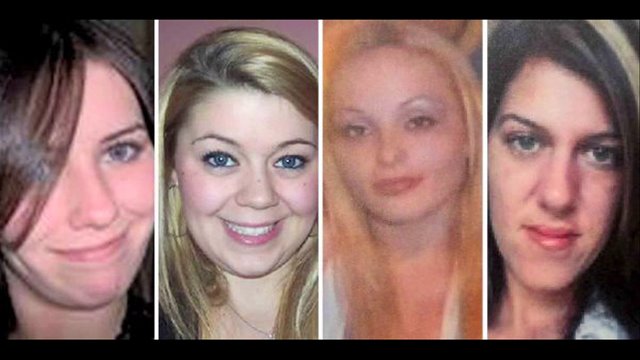 When 24-year-old Shannan Gilbert went missing in 2010, her family pressured police to look for the prostitute who once lived in Jersey City. She used to advertise on Craig`s List, and her last call was in May 2010 out in Oak Beach, Long Island.

When 24-year-old Shannan Gilbert went missing in 2010, her family pressured police to look for the prostitute who once lived in Jersey City.  She used to advertise on Craig's List, and her last call was in May 2010 out in Oak Beach, Long Island.

In December 2010, a police cadaver dog found the first of four, missing prostitutes who, like Shannan, advertised on Craig’s List.  The four were wrapped in burlap and had been dumped in open brush along Ocean Parkway within 500 feet of each other.

Four months later, the heads of three, other women were discovered near Oak and Tobay Beaches.  The remains of a toddler, linked to one of the women, were also found.  The skeleton of an adult male, wearing women’s clothing and thought to be Asian in ethnicity, was also there in  the brush.  Ten victims in one section of Long Island’s South Shore.

It wasn’t until December 2011 that Shannan Gilbert’s body was found in a mucky marsh in Oak Beach.  Investigators think she accidentally drowned, after frantically calling 911 on May 1, 2010, running from house to house in a gated community, screaming  “they are trying to kill me.”

At least one veteran homicide investigator who studies serial killer cases thinks Gilbert was going to be a target of the elusive, Long Island murderer.

“There’s no doubt in my mind that Shannan Gilbert is linked to those other victims in Gilgo Beach,” said retired NYPD Lt. Commander, Vernon Geberth.  Geberth has written multiple books, including one called “Sex Related Homicide and Death Investigations.”

One of the intriguing developments in the Gilgo Beach case involved the discovery of two, female heads, linked to nude torsos found in Manorville, Long Island years before.

In 2000, the torso of an unknown woman had turned up not far from Halsey Manor Road in Manorville, just north of the Long Island Expressway.

In the spring of 2011, the woman’s head, hands, and legs were found in the brush of Ocean Parkway, nearly 40 miles away.

In 2003, the torso of Jessica Taylor, a 20-year-old sex worker active in Manhattan, was discovered near the LIE and Halsey Manor Road, also in Manorville.

Taylor was only identified, because a police officer in Washington, D.C.,where Taylor was raised, recognized a tattoo that the killer apparently tried to gouge out of Taylor’s body.

In March 2011, Taylor’s skull, hands, and one forearm were found in the brush of Ocean Parkway, nearly 40 miles from Manorville.

Even though the Suffolk County District Attorney’s office has theorized more than one, serial killer could be working on Long Island, Vernon Geberth doesn’t think so.

Referring to the torsos found in Manorville, and the intact bodies wrapped in burlap in Gilgo Beach, Geberth told PIX11 Investigates, “I do say those four bodies and those heads and hands are related to the same killer.”

Geberth told PIX11 it would be unusual for more than one serial killer to be using the same dumping ground.

“If you want my opinion, it’s the same person,” Geberth said.  “He just got more proficient.”

PIX 1 Investigates decided to take another look at the unsolved, Long Island serial killer case, after a Manorville father of two was recently arrested, accused in the “cold case” murders of two prostitutes from more than 20 years ago.

48-year-old John Bittrolff has also been tied to the fatal beating of a third prostitute.  He’s pleaded not guilty to the murders of Rita Tangredi in November 1993 and Colleen McNammee in January 1994.

Bittrolff was linked to the homicides, after his brother submitted DNA to a state database last year, following a conviction for criminal contempt.  The sample showed a “familial link” to the cold case murders from 1993 and 1994.

Bittrolff was living in Shirley when the early 90’s killings took place and later built a large home in Manorville.

But Spota said there’s no evidence linking Bittrolff to the Gilgo and Oak Beach cases.