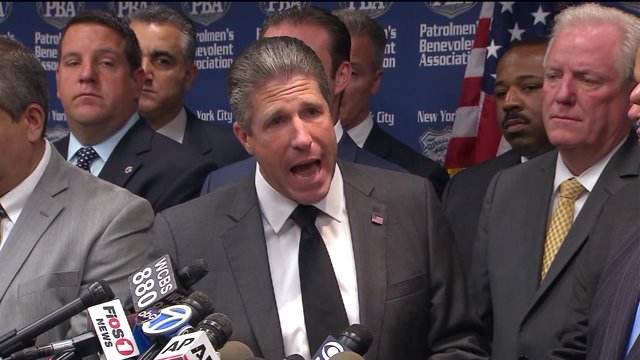 NYPD Union leaders took hits at the Medical Examiner and Al Sharpton in addition to defending their officer`s actions.

MANHATTAN (PIX11) — The president of the union representing New York City police officers says Eric Garner was not placed in a chokehold.

The explosive charge was made at a news conference Tuesday at PBA headquarters in lower Manhattan.

“Look at the video in real time not frame by frame. The interaction of bringing this person down to the ground, which was necessary to bring him under arrest, was seconds. When you look at it frame-by-frame, some would say it was a long period of time and it was a chokehold. He was a big man that had to be brought to the ground to be placed under arrest by shorter police officers. Sometimes the use of force is necessary, but it’s never pretty to watch,” Lynch said.

A report by the New York City Medical Examiner released last week ruled that the death was a homicide and listed one of the causes of Garner’s death as a chokehold. PBA President Patrick Lynch called the ME’s report “political.”

Mayor Bill de Blasio defended the report today saying, “I have a lot of respect for the Medical Examiner’s Office in New York City. I think it’s the gold standard in this country for the work they do, the science they use to come up with their answers, and I think that should be respected in and of itself.”

The PBA president and the Sergeant’s Benevolent Association president criticized the mayor and the police commissioner’s handling of the entire situation.

“There’s a lack of respect for law enforcement resulting from the slanderous, insulting and unjust manner in which police officers are being portrayed by race-baiters, politicians, pundits and even our elected officials,” said Lynch.

The union presidents also lashed out at the Rev. Al Sharpton.

“Al Sharpton is not a credible individual. He never has been, yet he’s all over the media. He gets front page,” said SBA President Edward Mullins.

Sharpton released a statement Tuesday afternoon in response to the news conference.

“It is time to have a mature conversation about policing rather than immature name calling and childish attempts to scapegoat. Again, we will continue to pursue a fair federal investigation to determine where the facts lie,” Sharpton said.