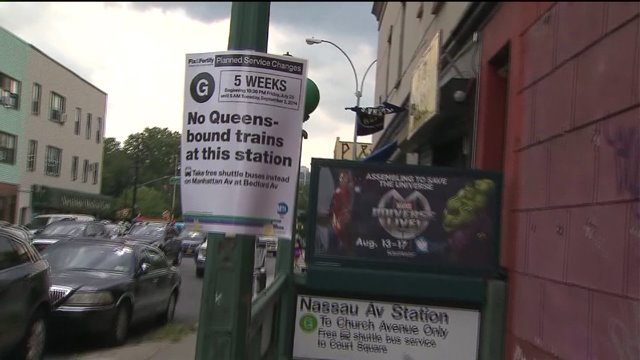 The G train tunnel has been closed for about a week so damage caused by Sandy can be fixed.

Until September 2, 1014, there’s no G train from Long Island City, Queens to Nassau Avenue in Brooklyn.

Shuttle buses are serving those stations.

The MTA is monitoring riders and demand and the location of signs.

Crews are doing repair to the tunnel that connects Queens and Brooklyn on the G.

In the first week, neighbors, drivers and some elected leaders asked the MTA to revisit the holding areas for the shuttle buses.

The MTA says this closure for 35 days will allow the work to be completed.

The tunnel that connects Brooklyn and Manhattan along the R line has been closed since August 2013. It is scheduled to be open at the beginning of October.

Connections to Manhattan service are also being offered. Riders can get a shuttle bus to L train service at Lorimer St/Metropolitan Avenue.

Also, there is a free out-of-system MetroCard transfer between the Broadway G train stop and Lorimer Street J/M stations and also the A/C at Hoyt-Schermerhorn Station.