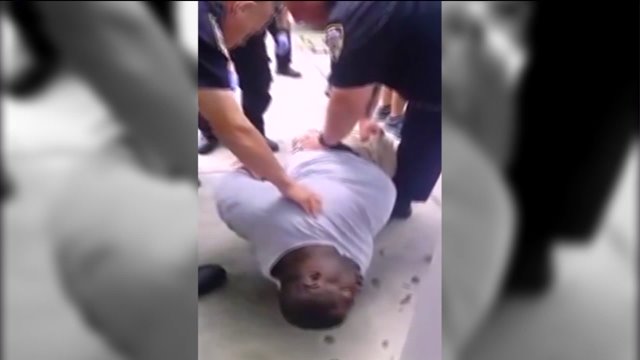 An official`s report said Garner did not seem to be distressed.

The police report compiled by a commanding officer in the investigation unit on Staten Island describes how Eric Garner resisted arrest. Officers Pantaleo and Justin D’Amico also claim they had to get control of Garner, but never mentioned the use of a chokehold.

“He started choking on him,” a witness said. “Like real bad.”

The report also reveals the supervising officer who responded to the scene in plainclothes, believed to be Sergeant Dhanan Saminath, arrived on the scene once Garner was down.

The sergeant said he “did not observe the perpetrator (Garner) make any statements” and “did not appear to be in great distress.”

Another female sergeant, Kizzy Adoni, made a similar statement in the report. She “believed she heard” Garner say he was having difficulty breathing. Adoni also said “The perpetrator’s condition did not seem serious and he did not appear to get worse.”

But several videos documenting the incident show Garner clearly stating he cannot breathe at least eight times. At one point he is unresponsive.

Sgt. Saminath mentions he called EMS because Garner was having difficulty breathing, which conflicts with his earlier statement that Garner did not appear to be in great distress.

People are now questioning how the police report can turn out to be so different from what videos show.

“You have a report that is stating that the sergeants were at the scene and the actions that they took was totally different from what the video states,” former NYPD detective and President of the Law Enforcement Alliance, Dennis Jones says.

Jones calls the report disturbing and hopes the conflicting statements are not part of a cover-up.

“The department is not wrapped around just this one incident,” Jones says. “We truly believe and have faith that this investigation is going to continue on.”

The NYPD did not comment when contacted by PIX11. Normally, the NYPD cannot comment during an open investigation.