Oy!: MTA plans toll and fare hike — and another one looms after that 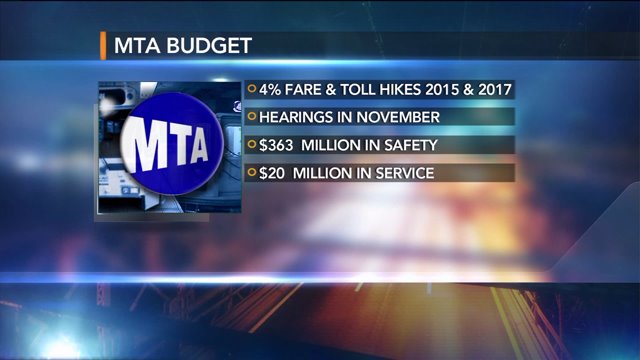 Listen up straphangers: the MTA will be increasing fares by 4% next year. Greg Mocker broke down where exactly your money will be going.

The MTA announced plans Monday to move forward with a planned toll and fare hike starting next year, but the increase may not be as high as originally thought.

The agency likely will put into effect a 4 percent fare hike for 2015, less than the original proposed hike of 7.5 percent.

It's still unclear how that 4 percent will be spread across individual fares, weekly and monthly discounts and commuter trains.

If the increase is spread out evenly, this is what it would like in fare pricing:

The planned increase will not be impacted by recent labor agreements with bus, subway and LIRR workers. Instead, the MTA will pay for those higher salaries by dipping into reserve funding.

The $14 billion budget revealed this week calls for $20 million in improvements, including additional select bus service. The MTA will also increase staffing to prevent equipment failure and respond to track problems faster.

Even though the fare hike is less than originally planned, commuters aren't out of the woods just yet.