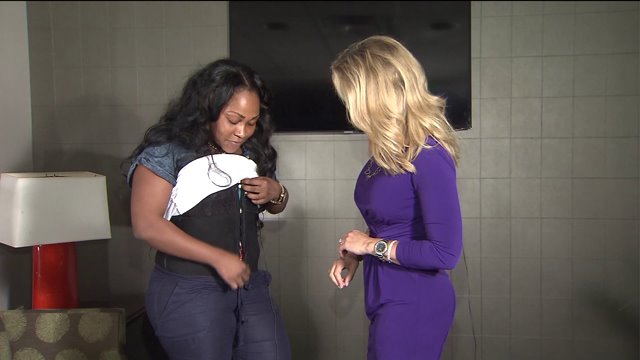 A loophole in New York State law lets any doctor perform cosmetic procedures, even without an anesthesiologist or any nursing help.

NEW YORK (PIX11) -- A loophole in New York State law lets any doctor perform cosmetic procedures, even without an anesthesiologist or any nursing help.

Women in the U.S. had more than 9 million cosmetic procedures in the 2012, and increasingly these procedures are being performed in office-based surgical suites.

What they didn’t know was he’s not a plastic surgeon. He’s actually a gynecologist who has been sued for malpractice multiple times and who runs a so-called plastic surgery mill in Midtown that operates around the clock for cash.

Carolyn Robinson, a mother of two, was sold when she heard the celebrities he’d worked on, including Nya Lee, of Love & Hip Hop fame, and Mob Wives’ Renee Graziano.

But Robinson said she didn’t get the celebrity treatment.

Instead, she was among patients who spent days in a tiny waiting room as Shahine worked around the clock, keeping them drugged with pills doled out by non-medical personnel. She found out too late that he operates without a  nurse or anesthesiologist, giving only local numbing skin injections.

“I said I want my money back,” Robinson recalled. “That’s when he sent another dose of the pills and I started getting weak, sleepy.”

Shahine proudly touts his surgical skills on YouTube, showing off the curves of his signature Brazilian butt lift and performing breast implant surgery, all with local anesthesia only.

But Robinson said Shahine botched her body-contouring liposuction and breast surgery-- only doing half the job.

“He just put in the implant and stitch me up,” she said. “He never gave me the breast lift or the tightening.”

Now she points to sagging breasts and bulges in her tummy after surgery in eight sites, which her own doctor said was too much in one day.

Lavern Gordon paid $6,000 cash for her liposuction with Shahine. She now wears a girdle over a workout mat stuffed with a book, a set up that Shahine allegedly told her would flatten her tummy and fix her uneven waist, some four months after surgery.

“I think he brainwashed me. He told me, ‘I’m gonna make you look good, give you the body you want,’” Gordon said. “And he showed me the celebrities he did, and I just went through with it.”

But when she arrived at the practice, Gordon said there were six patients ahead of her, and they had been sleeping in the office for at least three to four days.

In New York, it is legal for any type of doctor to do any type of cosmetic procedure. And they can do them in non-inspected operating rooms, provided they only use local anesthesia and “mild sedation.”

Liposuction amounts must be kept below 500 ml, or about 2 cups.

But there is absolutely no inspection of these sites, no enforcing of the drug or lipo rules, by anyone.

Shahine, who does liposuction, breast implant and other surgeries has never had his OR inspected or accredited as safe or sanitary, according to the New York State Health Department.

Vila is sounding the alarm about uninspected OR’s, warning that doctors can be putting patients’ lives at risk.

A third patient told us PIX11 News about her botched $6,000 surgery meant to rid her of rolls on her back and flatten her tummy. But it was only half done when an enraged patient who spent five days in this a waiting room came to Shahine’s OR.

“Then I looked up and saw Dr. Shahine push someone, and raise his hand to hit someone and next thing I know someone on the floor and it’s Dr. Shahine and I look and she’s got him by the collar and she’s just beating him and yelling, ‘Why did you hit me, why did you hit me?’” Cherise Robinson said.

“I got down off the table, naked, and I just held her hand that she had held on to his shirt and I said no you cannot do this.”

Despite starring in YouTube videos, when PIX11 News went to interview Shahine about his patients’ allegations of unsafe practices, but he would only talk by phone.

“Can you tell me about your sanitary procedures? Are you washing surgical instruments in hall bathrooms?” PIX11’s Kiristin Cole asked.

“What kind of question is that? I cannot answer stupid questions. A stupid question cannot be answered,” Shahine said. “OK, this is a medical office. We follow all the laws.”

The women who spoke with PIX11 News now all wished they’d asked more questions, and investigated the doctor before handing over their hard earned cash.

They have all filed complaints with the state and the district attorney, neither of which will comment on any possible investigation, citing confidentiality.

Before you give any cosmetic surgeon your money, ask questions.

If you’re thinking about going under the knife, print out these questions and bring them to your doctor’s office:

To run a doctor's education and malpractice history, click here.

Click here to learn more about ways to vet your doctor.