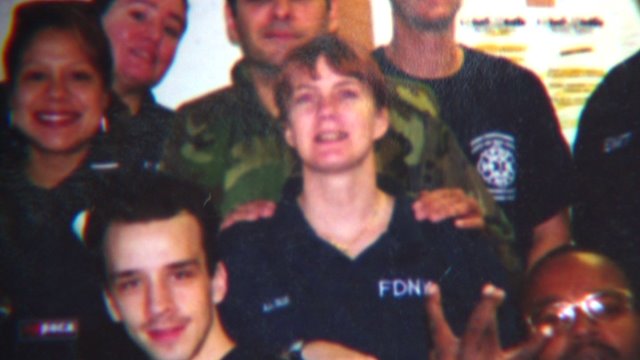 50-year old Kerry Aalbue, who was battling brain cancer and blood clots in the years after 9/11, was discovered on May 1, 2014, in a bedroom used by her husband.

FRANKLIN SQUARE, Long Island (PIX11) -- When Archie Nieman, a former worker with New York City’s Emergency Medical Services, went to check on his old friend, Kerry Aalbue, on May 3, 2014, he wasn’t prepared for the news he received from her estranged husband at their family home in Franklin Square.

“I asked where Kerry was,” Nieman told PIX11.  “He responded, ‘She’s dead. I found her upstairs shot in the chest last night.’”

Aalbue was 50 years old and battling brain cancer and blood clots in the years after Sept. 11. She was discovered on May 1, 2014, in a bedroom used by her husband.

The Nassau County Homicide Squad said it thoroughly reviewed the case and ruled it was a suicide. The gun that was used belonged to Aalbue’s late father-in-law, who was a retired cop.

But a number of Aalbue’s friends refuse to accept the suicide finding and wanted to talk to PIX 11.

“If you’re thinking suicide, wouldn’t you want to talk to the people the woman has spoken to, to get her state of mind?” former colleague and friend Lisa Walker asked.

Albue had started a jewelry business and made “living lockets” that were popular and sold at malls. One of her friends from the jewelry world said she spoke to Aalbue less than 24 hours before her death.

“She was very excited that she had just planned a vacation,” the colleague said, asking that she not be identified. “There was no way from that conversation there was any chance she would kill herself.”

Multiple friends pointed out that Aalbue was fiercely protective of her 5-year-old adopted son. When Aalbue failed to pick the child up at after-school May  1, teachers notified Aalbue’s husband, who then discovered his wife dead in his upstairs bedroom.

Aalbue’s oldest daughter, 22-year-old Jennifer, was very upset that EMS friends continue to question the circumstances of her mother’s death by trying to suggest there was foul play.

“That’s completely unfounded,” Jennifer Aalbue told PIX11 News. “The people that you are talking to didn’t know my mother, didn’t know her state of mind. She  was a very sick woman. She was very sick. It’s not anybody’s business, frankly.”

Friends complained they had made phone calls to detectives, offering information, but received no responses.

Aalbue was in the middle of a bitter divorce and lived in a separate section of the house from her husband, a retired New York City police officer.

A Nassau County police source told PIX 11 that just because someone doesn’t give clues they’re thinking of taking their life, it doesn’t mean they won’t do it.

“This incident was thoroughly investigated by the Nassau County Homicide Squad,” the official statement to PIX11 said.  “And there was no reason to believe it was anything but a suicide.”

Our report on Aalbue comes on the heels of findings from Mount Sinai Hospital this past week, indicating more than 2,500 first responders to the Sept. 11 attacks, including firefighters, police officers, emergency medical workers and construction personnel, have been diagnosed with various cancers  in the nearly 13 years since that tragic Tuesday.