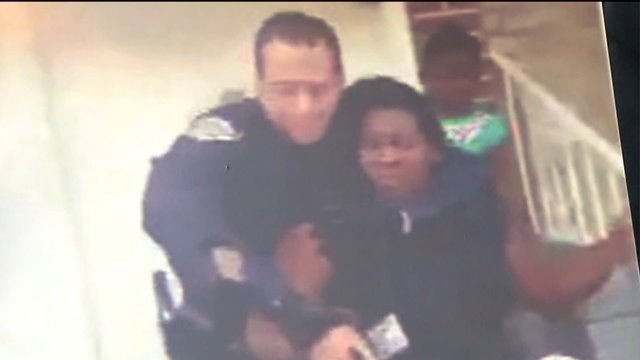 On the heels of 2 chokehold arrests, a pregnant Brooklyn woman says an NYPD officer put her in the illegal hold while arresting her over a BBQ grill.

EAST NEW YORK, Brooklyn (PIX11) -- She and her family were having a cookout in their own yard, but a woman who is seven months pregnant said that didn't stop NYPD cops from putting her in a chokehold and arresting her, her husband and brother-in-law.

It's caused at least one prominent community activist to declare that the police department's "Broken Windows Policy is broken," and to call for the commissioner's resignation.  For his part, Commissioner Bill Bratton spelled out ways on Monday in which he's ordered reform in his department..

Rosann Miller, 27, joined with community activist Charles Barron Monday afternoon to talk about the incident that happened in her East New York front yard Saturday, and extended into her home, according to witnesses, including someone who captured the encounter on cellphone video.

"I know the police are there to help us," said the mother of three, who's expecting to give birth to her fourth child in September.. "But this time they didn't show that.  I'm in pain.  A lot of pain."

She and her husband, Moses Miller, sought out Barron and his wife, city council member Inez Barron, after, they said, officers went into their front yard to tell them they had to move their barbecue to the back yard for their family cookout.  When they disagreed, it led to the arrest.

"He has her in a choke hold," Barron said, referring to an officer seen subduing Rosann Miller in a series of still images that the Millers' lawyer had produced from cellphone video recorded at the scene.  "Thank God she fought him off," said Barron, "and [her] seven year old daughter is watching all this."

"Since when is barbecuing against the law?" asked Barron.

At least two officers and a supervisor had been on scene, and they arrested Miller's husband as well as her.  Her husband said the cops dislocated his right arm, and generally treated him, his wife and his brother very roughly.

"They need to go back to basic training," Moses Miller said about the NYPD, "and do a better job than using brutal force."

The incident happened in the wake of at least three prominent recent cases involving police aggressively detaining residents for low level, nonviolent crimes.  The week before last, Eric Garner died in police custody in Staten Island after being arrested by an officer using a choke hold, on suspicion of selling loose cigarettes.

Early last week, an officer was recorded on camera beating a suspected subway fare jumper while keeping him in a choke hold as well.  Also, late last week, a cop was recorded on video kicking an arrestee in the head after the man was already in handcuffs face down on the ground following an arrest for possession of a small amount of marijuana.

"We don't want to hear nothing about retraining," Barron said, referring to statements Police Commissioner Bill Bratton has made since Eric Garner's death became news after cellphone video of his takedown went viral.  "This is about being humane, about being sensitive to a pregnant woman."

Barron also called for the police commissioner to step down.

For his part, rather than entertaining any suggestion that he resign, Commissioner Bratton has said he's retooling the department.  In a statement on Monday afternoon, Bratton pointed out that he has asked for an additional 1000 officers, who, along with the current force, will work under the eye of an inspector general.

He also said that federal investigators will review the Garner death, and that the NYPD has hired the same internal reviewer Bratton had worked with in Los Angeles, when he was chief of the LAPD from 2002 - 2009.

None of the officers involved in the Saturday incident with the Miller family is under disciplinary status.  Two officers who arrested Garner are on desk duty, and the NYPD's internal affairs bureau is investigating the aforementioned subway fare evader arrest.